We stand on the shoulders of dozens of pioneers who built our movement, but may now be forgotten. They displayed an uncommon vision, creativity, conviction, daring, and persistence. They advocated concepts that had not been considered or advanced before. They did deeds that had not been done before. They kept going even when the going got tough. This essay honors one of these pioneers -Peter Singer. 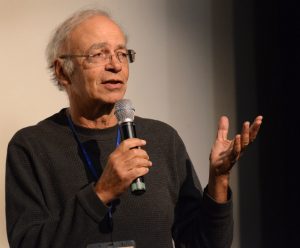 In the early 1970s, a group of young philosophy post-graduate students and others at England’s Oxford University became intrigued by Brophy’s editorial. They collected 13 essays into a book titled Animals, Men & Morals.

In 1973, a young member of the group named Peter Singer published a review of that book in the prestigious New York Review of Books. Because of the positive public reaction to the review, Peter was invited to teach a course on animal rights at New York University. Two 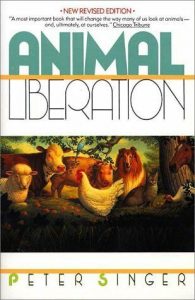 years later, he expanded his lesson plan into a book – Animal Liberation, which argues for equal consideration for the suffering of all sentient beings.

The book launched a fundamental re-examination of the status of animals in our society, leading eventually to promoting the idea of animal rights. It was based largely on the concept of utilitarianism, which seeks to minimize suffering for the greatest number of sentient beings. The concept was first introduced in 1789 by British philosopher Jeremy Bentham who famously declared: “The question is not ‘can they reason?’ nor ‘can they talk?’ but ‘can they suffer?’”

The closely related concept of animal rights – that all sentient beings are entitled to equal moral consideration – was articulated in great detail in Tom Regan’s 1983 book The Case for Animal Rights.

The timing of Animal Liberation in 1975 was most propitious. The bloody war in Vietnam had just come to a close, leaving some social justice activists ready for a new cause. More importantly, the first World  Vegetarian Congress to be held in the U.S. later that Summer produced hundreds of vegetarian activists ready to embrace the animal rights message. 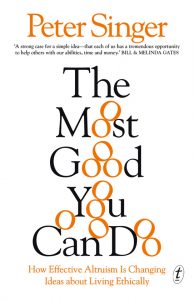 Singer is generally considered the most prominent advocate of effective altruism, a form of utilitarianism, which argues that people should try to reduce suffering in the most effective manner possible. His most recent book is The Most Good You Can Do, although his first essay on this subject dates back to 1972.

Effective altruism has had a direct and disproportionate impact on the animal rights movement through Open Philanthropy, a funding organization launched in 2014 by Facebook co-founder Dustin Moskovitz and his wife Cari Tuna. In the past five years, Open Philanthropy has donated some $130 million to a number of farm animal welfare organizations, including The Humane League, Mercy for Animals, and Animal Equality. Because of its effective altruism orientation and its financial might, Open Philanthropy has turned the attention of most farmed animal rights organizations from ending animal exploitation to improving the conditions of their exploitation“

Peter Singer has authored, co-authored, or edited nearly 50 books. The ones dealing more directly with animal issues are: 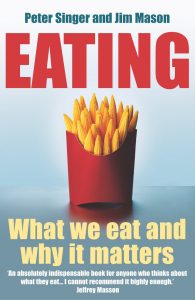 The Ethics of What We Eat: Why Our Food Choices Matter (co-author with Jim Mason), Rodale, New York, 2006

On two occasions, Singer served as chair of the philosophy department at Monash University, where he founded its Centre for Human Bioethics. He has also held professorships at Princeton University and the University of Melbourne.

Singer co-founded several animal rights organizations, including Animals Australia, The Great Ape Project, and Animal Rights International. He was inducted into the U.S. Animal Rights Hall of Fame in 2000. 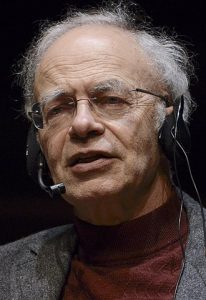 Peter was born in 1946, in Melbourne, Australia, to Jewish parents who had escaped Nazi persecution in Austria in 1938.

In 1968, Peter married Renata Singer. She is a novelist and has collaborated on publications with her husband. They have three daughters: Ruth, Marion, and Esther.