We at FARM have had considerable experience with street advocacy over the past 45 years, through our national grassroots campaigns – Meatout, Vegan Earth Day, World Day for Farmed Animals, and Gentle Thanksgiving. For seven years, we toured colleges and rock concerts to obtain vegan pledges from young people. In this penultimate edition of our biweekly blog, we share some dos and don’ts.

The purpose of street advocacy is to induce the public to seek more information about veganism and animal rights. It is most definitely not to antagonize the public by disrupting their dinner or blocking their commute.

The principal tools of street advocacy are handouts, signs, and banners. Other options are vegan food samples. Recent improvements have made video screens more practical. An advertising budget, expands the options to billboards and transit displays. 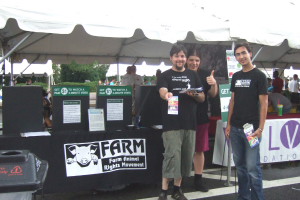 The opportunity arises wherever large numbers of people gather in one area for purposes that are not narrowly defined. A local vegfest or earth day event offer suitable opportunities. A BLM or prolife march does not.

With FARM pioneering the picketing of slaughterhouses and meat industry events since the 1980s, the chief benefit of such events is in energizing and motivating the participants to do more useful activism elsewhere.

Perhaps the most celebrated street activity in the history of the U.S. animal rights movement was the 1990 March on Washington, with 20,000 participants marching to a rally at the U.S. Capitol. The most costly and involved was our 2011-2017 10 Billion Lives program that had up to three vans visiting colleges and rock concerts throughout the U.S. to screen graphic videos and collect vegan pledges.

Common handout formats are 4×6” postcards and trifolds that fit into most pockets. They should be visually attractive and succinct enough to invite prompt reading, then recommend a website or two for more information. One side of the card or the trifold cover could refer to the occasion to suggest a legitimate connection. 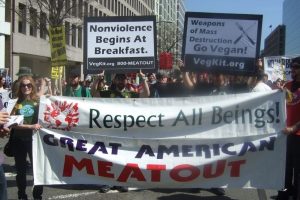 The most common signs are approximately 20×30” – convenient to carry, hold aloft, or even wear as a sandwich board. If you lay out the message on your computer, a local printer will print it for you on foam core or other light-weight sturdy material. In a march or rally setting, you want your message(s) on both sides of the sign and you may want to secure it to a six-foot pole to ensure visibility.

Larger 4×6’ boards are useful in a stationary setting, perhaps along an urban commuting route. The large font size here allows only a few words per board. Longer messages may be conveyed in a series of boards spaced 20-30 feet apart.

Banners, carried by two people, are particularly useful in marches or rallies, where they bear more cachet than a sign. They typically measure 10×2 feet and can be produced by your local sign printer. Two-sided banners are preferred in these settings. You want to create pockets on both ends, where you can insert a six-foot pole for each person, again to improve visibility.

Availability of an advertising budget opens the important options of billboards and transit advertising.

The size, position, and placement of billboards convey a sense of mainstream acceptance, power, and authority. Because billboard operators are not allowed to maintain bare boards, nonprofit organizations can get amazing deals in less desirable locations that are hard to keep covered by 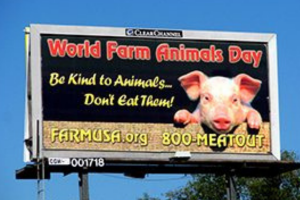 commercial advertisers. Finding one sympathetic local rep for a national billboard company, like Lamar, Outfront, or Clear Channel, can get your board message up in several locations throughout the U.S.

For messages of a more limited space or time value, most cities have mobile board operators that will print and drive your board along a specified route for several days.

Many municipal buses and underground transit cars sell advertising space for 25×11” cards. Although these cards are much smaller than billboards, they can contain a longer message, because passengers are not streaming past them at 60 miles/hour. Transit companies also sell space on the outside of buses and bus shelters.

As we noted above, street advocacy tools need to be adapted to the occasion. With marches and rallies, it’s pretty simple – you just grab your sign or banner and try to stay close to the front or at least visible to the TV cameras. Sometimes, you can do handouts as the crowd gathers, then switch to elevated signs and banners once the event starts. 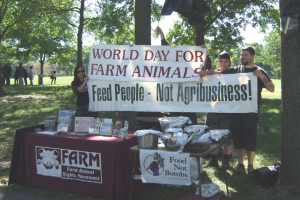 Effective handouts, commonly referred to as leafleting, requires a bit more planning, depending largely on the number of participants. In all cases you want to locate along a path with heavy pedestrian traffic, without obstructing. All participants should wear a T-shirt, or other item with your affiliation or message and you should place a sign a few feet ahead of you, so passersby can know what to expect.

With two of you, you want to cover both sides of the path. A third participant can be most useful by getting in front of each oncoming group and pretending to be interested in your leafleting as an inducement for the group. With four participants, you may want to start an additional location.

Setting up an information table with a banner, handouts, TV screen, food samples, and other attractions, commonly referred to as tabling, requires more effort and is much more appropriate for an event attended by interested parties, rather than for open street advocacy. 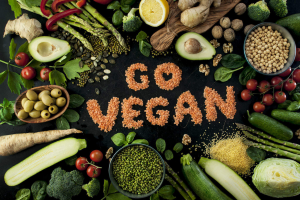 It has been said that the sea change in national consumption of animals will come only when plant-based meat and dairy products gain substantial acceptance with the consuming public in the next decade. That therefore street and other forms of vegan and animal rights advocacy are premature.

Well, yes and no. Street advocacy can certainly help accelerate that switch to plant-based meat and dairy products. And, the switch only makes vegan and animal rights advocacy more acceptable – it doesn’t obviate it.