The basic elements of a movement are vision, campaigns, publications, and conferences. How did those elements play out in forming, shaping, and nurturing our own animal rights movement? What do they portend for our future? Let’s take a look. 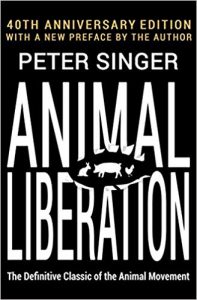 In 1975, Australian philosopher Peter Singer introduced the importance of considering animal suffering to the American academic community in his seminal book Animal Liberation. Today’s concept of animal rights – that all sentient beings are entitled to equal moral consideration – was presented in extensive detail by Tom Regan’s 1983 book The Case for Animal Rights. Many other writers have contributed to expanding the concept and its implications since then.

Founding campaigns are those that have played a pivotal role in our movement’s founding by inspiring us or by enhancing the public perception of our vision. 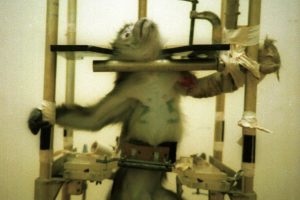 In 1980, Alex Pacheco launched a small student group at George Washington University, named People for the Ethical Treatment of Animals (PeTA). The following year, he documented grisly experiments conducted by a local lab on macaque monkeys, leading to the first ever criminal conviction of a U.S. animal experimenter. The associated publicity transformed PeTA into a national organization and implanted the animal rights concept in the national consciousness.

In the summer of 1981, FARM brought together a couple hundred vegetarian and animal rights activists to a conference in Allentown (PA) that became the launch pad of the animal rights movement.

In the two years that followed, Ohio child welfare worker and social justice activist Richard Morgan formed a coalition of 80 groups and recruited thousands of participants for massive antivivisection rallies at the Boston, Davis (CA), Madison, and Yerkes (GA), national primate research centers, as well as in New York and Washington, DC. Our movement remained focused squarely on vivisection till the mid-1990s.

The NIH Sit-In. On the morning of July 15th 1985, PeTA recruited one hundred of our movement’s top leaders and activists to take over the National Institutes of Health offices responsible for funding baboon head bashing experiments at the University of Pennsylvania. We stayed there for four days, until Secretary of Health and Human Services suspended funding of the experiments. 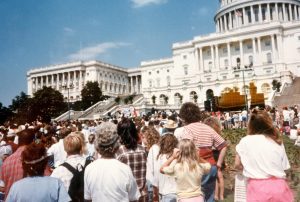 The March On Washington on June 10th 1990 was definitely our movement’s largest event, with an estimated 25,000 participants. The action was organized by the National Alliance For Animals. A second attempt six years later did not turn out as well.

The Hegins Pigeon Shoot. Each Labor Day since 1934, the little town of Hegins (PA) held a pigeon shoot attended by hundreds of paying spectators. Beginning in 1986, hundreds of animal protesters would show up each year, peaking at 1500 in 1992. Following years of protracted physical, legal, and public relations battles, the shoot was canceled in 1999.

Our movement has enjoyed several print publications in the past, including The Animals’ Agenda (1972-2002), Satya (1994-2007), and The Animals Voice (1986 – still publishing online). VegNews, a colorful bimonthly magazine co-founded in 2000 is still in print, with 80,000 copies and a large online readership. Some animal organizations still publish a quarterly print magazine about their work.

With the rapid rise of social media and the attendant shrinking attention span, long articles have been pretty much replaced by podcasts and blogs, Facebook posts, Instagram pictures, and Tweets, as a means of communicating within our movement. Unfortunately, that has led to some loss of content, judgment, and accountability.

Conferences have proven to be highly effective in offering activist training, inspiration, and networking opportunities. Since the beginning of this century, they have become the only movement-wide events. 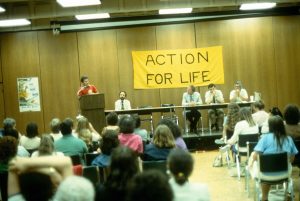 Indeed, in August of 1981, we organized Action For Life, the founding conference of the animal rights movement in Allentown (PA). That led to the formation or breakout of PeTA, Farm Animal Rights Movement, and several other organizations. The Action For Life conferences continued for six more years in San Francisco, Chicago, Los Angeles, Washington, and Montclair (NJ).

By 1987, a legislative training seminar offered by The National Alliance for Animal Legislation had grown in size and scope to become a full-fledged annual conference that eclipsed our Action For Life events, so we stopped for the next decade.

However, following the 1996 conference, our movement became highly abusive to the conference organizers leading them to quit and disappear from sight. 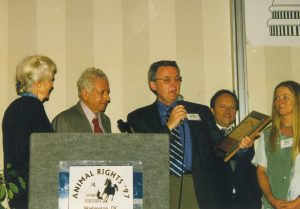 It occurred to us that cancellation of the national conference, at that early stage of our development, could have a disastrous impact on our movement’s morale. So, we took up the challenge and organized a 1997 conference in suburban Washington (DC), fully expecting that other organizations would step in in 1998 and 1999… But no one did.

Then, 2K happened. All computers were supposed to stop working at the stroke of midnight on December 31, 1999. Prophecies ranged from the second coming to impending apocalypse. People were planning all kinds of strange things. But no one had planned to do an animal rights conference. So, we did it again. And kept doing it, until now.

At a 2002 plenary session, the MC referred to a female speaker’s “great shape,” leading a dozen attendees to mount the stage in protest. In 2003 and several subsequent years, other animal advocates attempted to borrow conference attendees for conflicting presentations or outside events. One year, a small group of outside animal activists actually disrupted a plenary session and damaged some exhibits, because they did not like our program.

In a 2003 fit of madness, we arranged two conferences one month apart, in Washington and Los Angeles to determine whether the West Coast would be receptive. Both events proved highly successful, leading us to alternate between the two cities in subsequent years. 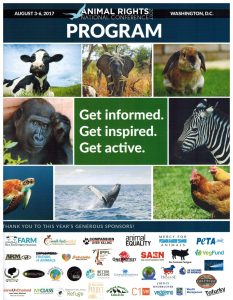 In 2004, The Humane Society of the U.S. led a permanent exodus by five major sponsors to protest a couple of our more radical speakers. They organized their own biennial conference called Taking Action For Animals, no longer active. PeTA withdrew sponsorship for a decade because attendees criticized their deadly dog and cat policies.