We stand on the shoulders of pioneers who built our movement, but are now largely forgotten. They displayed an uncommon vision, creativity, conviction, daring, and persistence. This is the first in what I hope will be a series of stories memorializing their amazing contribution to our movement.

Cleveland Amory was born on September 2, 1917 into a highly privileged Boston family. Indeed, his first books, like The Proper Bostonians (1947) and Who Killed Society? (1960), were reflections on America’s high society. He graduated from Harvard University in 1939 and served in the U.S. Army during World War II. 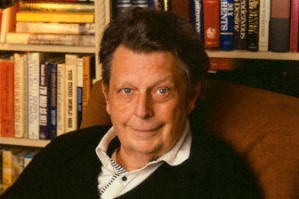 In the late 1940s, Cleveland embarked on a distinguished career as television commentator on NBC’s Today show, and as a columnist in highly popular national magazines like TV Guide, Parade, Saturday Review, and Saturday Evening Post. These prestigious assignments brought him personal wealth, influential friends, and an amazing power to influence social norms.

Fortunately, he chose to use his social power on behalf of animals.

In the 1960s, Cleveland Amory became increasingly involved and outspoken on animal protection. He joined the board of the Humane Society of the U.S. in 1962 and served as president of the New England Anti-vivisection Society from 1987 until his death in 1998. He enlisted a number of film celebrities in his animal campaigns. 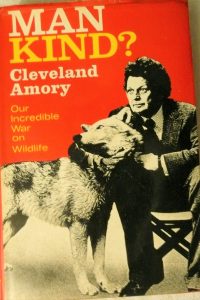 Cleveland is largely credited with launching the U.S. anti-hunting movement. In 1963, he was fired from his position as commentator on NBC’s Today show for actually suggesting on the air the formation of a club to hunt hunters. Four years later, he launched the Fund for Animals to protect wildlife from hunting and trapping. In 1974, he published Mankind? Our Incredible War on Wildlife, which led the following year to the celebrated CBS anti-hunting documentary The Guns of Autumn.

In 1979, Cleveland established America’s first animal sanctuary – the Black Beauty Ranch in Texas. It was initially purchased to house some of the Grand Canyon burros that were marked for slaughter by the National Park Service, but airlifted to safety by the Fund. The sanctuary has since grown from the initial 83 acres to 1300 and is home to thousands of animals rescued from human abuse.

A year before that, Cleveland became involved with Paul Watson in confronting the Canadian seal hunt. Paul had just left the Greenpeace board because of his radical views. When Paul expressed an interest in confronting pirate whaling operations, Cleveland helped found the Sea Shepherd Conservation Society by purchasing the organization’s first ship – the Sea Shepherd. He participated in several expeditions.

After his death, the Fund for Animals and Black Beauty Ranch were absorbed by the Humane Society of the U.S. 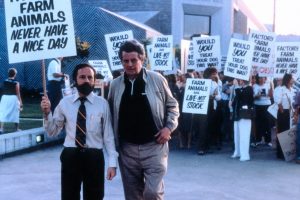 We first met Cleveland Amory at our 1981 Allentown conference, where he reviewed the dramatic evidence of animal abuse gathered by Alex Pacheco at the Institute for Behavioral Research. Cleveland’s inside track with the media, propelled Alex’s documentation, along with his fledgling student organization – People for the Ethical Treatment of Animals (PeTA), and the animal rights concept into the national consciousness.

Back then, any animal publicist knew the simple formula. If you wanted media for your event, you had to get Cleveland Amory. No Cleveland – no media. We were lucky enough to be on his short list, despite his exclusive social standing and busy schedule.

In the early 1980s, Cleveland joined us in leading the first ever protest march from the local police station, through the foul-smelling rendering plants of 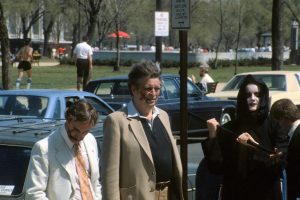 Vernon, California, to the infamous Farmer John pig slaughterhouse. The slaughterhouse, with its walls depicting bucolic scenes of happy pigs cavorting in picturesque meadows, has since become a magnet for many other vigils by us and others.

Cleveland brought in the media again for our 1986 protest of hot-iron face branding of condemned dairy cows, in front of the U.S. Department of Agriculture in Washington, DC. In solidarity with the cows, we all wore an X on our cheeks affixed by a large stamp wielded by an activist dressed as the Angel of Death. 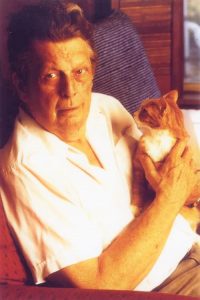 Cleveland Amory was a prolific writer, with 15 books and countless magazine articles to his credit. In addition to his weighty reflections on American high society and animal rights, Cleveland authored four books about his favorite cat Polar Bear:  The Cat Who Came for Christmas (1987), The Cat and the Curmudgeon (1990), The Best Cat Ever (1993), and Cleveland Amory’s Compleat Cat (1995). His last book was about his beloved Black Beauty Ranch – Ranch of Dreams (1997).

Cleveland passed away on October 14, 1998, at age 81. His ashes were spread across Black Beauty Ranch. Cleveland was among the first inductees into our Animal Rights Hall of Fame in 2000. He will live forever in our grateful memory.