With World Day for Animals in Laboratories coming up on April 24th, this is a fitting time to review the history of vivisection and the progress achieved by our movement and its predecessors.

Exploitation of animals in the name of science came much later in the history of human civilization than their exploitation for labor, religious sacrifices, and food. Despite a few sporadic reports of animal experiments dating back to the 4th century BCE, the advent of 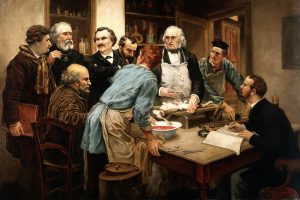 vivisection is generally associated with William Harvey’s discovery of the circulation of blood on live animals in 1616.

Harvey’s demonstration of striking similarities between human and animal anatomy and physiology created a problem for French philosopher Rene Descartes, who was championing Aristotle’s creed that animals were mere objects created for human use. He rebutted that, despite their similarities to humans, animals lack a soul which houses both abstract intelligence and sentience.

In the 18th and 19th centuries, France became home to atrocious experiments on conscious horses, dogs, and other animals, led by Louis Pasteur who developed anthrax and rabies vaccines. The infamous François Magendie used six-week-old conscious puppies to identify the different functionalities of dorsal and ventral spinal nerves. Millions of animals were sacrificed in the discovery and testing of vaccines against diphtheria, tetanus, tuberculosis, polio, and other dreaded human diseases.

The anti-vivisection movement and associated legislation got their start in England in the 1860s. The Royal Society for Prevention of cruelty to Animals (RSPCA), with support of British medical societies, condemned painful experiments, but approved those performed under anesthesia. The 1876 Cruelty to Animals 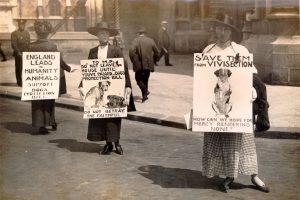 Act that followed allowed painful experiments only when “absolutely necessary. “

Opposition to the use of animals in medical research in the United States also arose in the 1860s, when Henry Bergh founded the American Society for the Prevention of Cruelty to Animals (ASPCA). In 1883, Caroline Earle White founded the American Anti-Vivisection Society (AAVS), first to regulate vivisection, then to oppose it altogether. 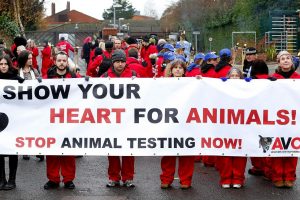 acquiescence to vivisection, four AHA officers left to form The Humane Society of the U.S. (HSUS) in 1954.

The most sweeping legislation to regulate vivisection in the U.S. has been the 1966 Laboratory Animal Welfare Act. The Act explicitly requires that any painful procedure be performed with tranquilizers, analgesics, and anesthetics, except when their exclusion is “scientifically necessary.” Unfortunately, the Act’s protection excludes birds, rats, mice, farmed animals, and cold-blooded animals.

The concept that animals may have certain rights, including the right to life, freedom of movement, and bodily integrity was introduced in the U.S. by Australian philosopher Peter Singer’s seminal 1975 book Animal Liberation.

A couple of years later, one of Singer’s students and social justice activist Henry Spira stopped cat blinding experiments at New York’s American Museum of Natural History. Next, he got New York State to repeal its “pound seizure” law that forced local shelters to give up their animals for research. By 1981, he had shamed 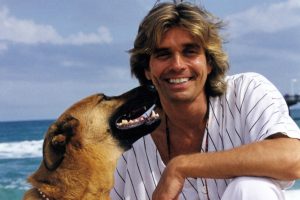 major cosmetic companies to pledge millions of dollars for animal-free alternatives to cruel animal testing of their products.

In that same year, the 1981 investigation at Maryland’s Institute for Biomedical Research by young activist Alex Pacheco launched both the concept of animal rights and his fledgling student organization People for the Ethical Treatment of Animals (PeTA) into the national consciousness. In the next three years, Richard Morgan and his Mobilization for Animals (MFA) recruited thousands for massive protests at the four national primate research centers, as well as in New York and Washington.

Other anti-vivisection organizations active at the time included In Defense of Animals, Last Chance for Animals, Physicians’ Committee for Responsible Medicine, and the American, New England, and National Anti-Vivisection Societies. Stop Animal Exploitation Now! joined the anti-vivisection struggle in 1996.

Indeed, during the first two decades of its existence, our movement was heavily preoccupied with vivisection. Until 1996, Farm Animal Rights Movement (FARM) was practically the only national organization dedicated to farmed animals.

40 years ago, the use of animals in research, training, and testing was loosely governed by the permissive Animal Welfare Act of 1966. 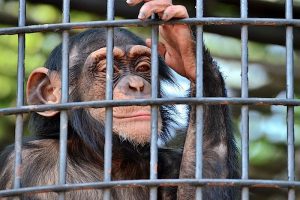 More recent amendments have imposed considerable restrictions on animal use.

40 years ago, hundreds of chimpanzees were subjected to cruel medical experiments in a national network of primate research centers. Today, the survivors are retired.

40 years ago, the infamous LD50 (Lethal Dose 50) test exposed a hundred small animals to increasing doses of a toxic substance, until half of them died. Today, that test is no longer in use.

Despite all the efforts to the contrary, animals are still subjected to vivisection in four distinct applications: 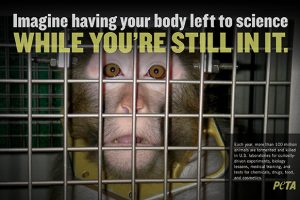 The number of animals affected by vivisection cannot be calculated with any precision, because most are excluded from the protection and accounting of the Laboratory Animal Welfare Act.

The websites of the anti-vivisection organizations linked above offer much more details on the current condition of animals in laboratories, as well as on the progress achieved to date.

[Most of the material for this article has been abstracted from the scholarly masterpiece The Longest Struggle (2007) by historian Norm Phelps and from Wikipedia articles on “Vivisection” & “Animal Testing.”]