One of the inducements for locating our organization in the nation’s capital was the easy access to government buildings and their occupants in our struggle to save animal lives. The building of particular interest to us was the U.S. Department of Agriculture. With National Agriculture Day coming up on March 23rd, this seems like a fitting time to recount our attempts to gain USDA’s attention.

It Was About the Pictures

When we first got going, in the mid-1970s, we found the USDA to be an invaluable resource for documentation of farmed animal abuse.  Years before any undercover investigations, we would spend hours in their convenient Agricultural Photo Library poring through thousands of color slides and requesting copies for a nominal fee. 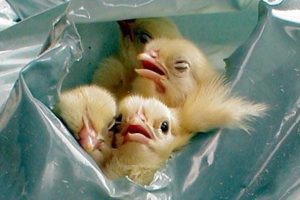 Those images were pretty much what you would see today: male chicks macerated or suffocated upon hatching, breeding sows confined for life in metal crates, and dairy cow babies chained in tight wood crates, as well as slaughterhouse scenes. Then, as now, this was just considered “common practices of animal agriculture.” The USDA was probably just as proud of their photo library as the U.S Department of Interior was of theirs, showing bison grazing in Yellowstone or tourists visiting the National Mall.

We would then display these slides in a desperate attempt to call attention to the 98% of the animal abuse problem, but with little success. For the first two decades, our movement remained solidly in the anti-vivisection camp.

Once we had our fill of slides, we pondered about getting the USDA to change their practices. But first, we had to get their attention.

We began by erecting displays of signs and posters, calling for an end to animal abuse, on the National Mall, directly in front of the Secretary of Agriculture’s office. 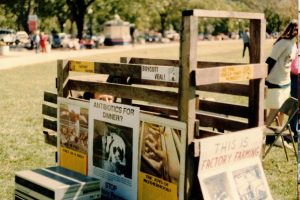 We followed up with hunger strikes chained in a veal crate, for 24 hours, then for 100 hours. During the day, we were surrounded by tourists marveling at the quaint local customs. At night, we were visited by Park Police officers making sure that we didn’t sleep, as that would be considered “camping,” which is prohibited on the National Mall.

We staged street theater, with activists locked in crates and a mock slaughter line supervised by a villainous figure in a “bloody” lab coat. We had “blood”-splattered human bodies in giant cellophane-covered trays.

Of course, we picketed the USDA building on suitable occasions. One such occasion was USDA’s 1986 decree that dairy farmers withdrawing their cows from production in response to the animal milk glut had to mark their faces with a hot iron brand. That was the first and only time that we had both the dairy farmers and the milk-drinking public on our side, and the decree was withdrawn.

Eventually, we shifted to a more dramatic strategy. 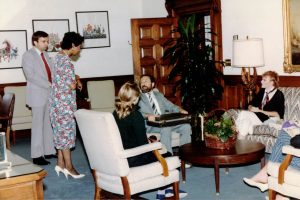 In 1988, after casing the office of the Secretary of Agriculture, we found an unguarded and unlocked back door. Eight of us, including a mom with her six-year-old, synchronized our watches (no cell phones back then) and entered the building separately so as to not call attention of the guards. At the appointed time, we all converged on that back door, walked into the Secretary’s office and set down on the convenient couch and chairs.

The Secretary left immediately, although we didn’t look very threatening. The guards who replaced him didn’t quite know how to deal with us. After extended negotiation, we scored a meeting with a very friendly Deputy Secretary who listened politely to our case against animal abuse.

In 1992, we decided to block entry to the building, but had to develop a strategy. Since we had to alert the media, USDA security would find out and stop any outside attempt to storm the gateway. We had to offer a distraction.

Two of us, with an animal rights banner tucked under our jackets went inside an hour before the scheduled time and had a snack in the building’s cafeteria. While we were doing that, the outside 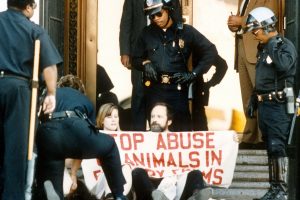 picketing began, the media had their cameras poised, and a number of USDA guards were deployed to prevent any assault on the building.

Then, the two of us calmly walked to the gateway from inside the building, stood there briefly to alert picketers, then quickly sat down blocking the entry and displaying our banner. Of course, the guards rushed toward us, allowing the picketers to run up and join us.

It seems so obvious now, but it wasn’t then. Reforms in the use and abuse of animals for food will not come from the USDA. Nearly half of the department’s $140 billion budget covers food assistance programs. The rest is devoted mostly to subsidizing and supporting current agricultural practices, including the horrific treatment of animals raised for food.

Biden’s recently confirmed Secretary of Agriculture Tom Vilsack, served in the same position under President Obama. In addition to presiding over continued use and abuse of animals for food, he encouraged consolidation of Big Ag to take unfair advantage of small farmers, supported location of highly polluting factory farms in minority communities, and promoted 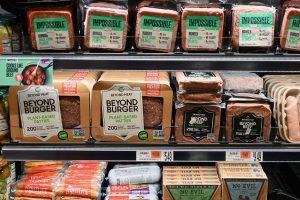 The reforms we all seek will come only with the introduction of delicious, healthful, convenient plant-based meat and dairy products. Our greatest opportunity to save animal lives is to encourage the adoption of these products by our families, friends, and neighbors.