Thirty-five years ago, a ragtag group of vegan activists took on one of the world’s largest purveyors of animal flesh in a battle of wits. It makes for a fascinating story, but also a lesson that, in social justice activism, size does not always matter. Please join us and judge for yourselves.

Burger King sales were down sharply in the Fall of 1985. McDonald’s had just completed its successful McDLT (McDonald’s Lettuce and Tomato) campaign, and Wendy’s reached new sales records with its celebrated “Where’s the beef?” commercials. Burger King had to do something to top that.

In November, the prestigious J. 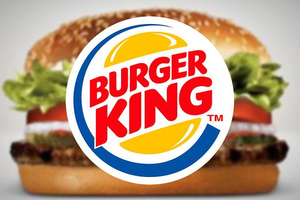 Walter Thompson advertising firm offered Burger King a $40 million (real money back then) “Where’s Herb?” promotional campaign. Their television and print commercials featured a socially and mentally awkward character named Herb who had never eaten a Burger King Whopper. Despite his handicaps, Burger King was still eager to find him, so that he too could sample their vaunted product.

Television commercials on all major networks featured interviews with Herb’s parents, friends, a teacher, and even a drill sergeant. They all knew Herb, testified to his awkwardness, but hadn’t seen him lately and didn’t know where to find him. Some commercials showed tantalizing partial images of Herb from behind, or with his face obscured.

In early January of 1986, we at FARM had just stopped our national Veal Ban Campaign, when a kind Italian restaurant owner asked us to provide him a humane source of veal. We needed a new project, and the Burger King campaign was too good to pass up.

Since no one had seen Herb, we would come up with our own candidate, actually named Herb, and willing to list all the good reasons why he had never eaten a Whopper and never would. But, how to get the attention of national media for our Herb and all his good reasons for avoiding animal flesh? 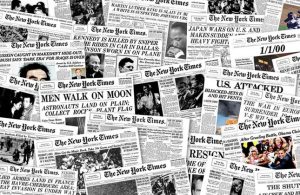 Back then, the obvious answer was to buy a full-page spread in the New York Times. Back then, that required $26,000 (it’s up to ten times as much today), and we didn’t have that kind of cash. Eventually, we found a wealthy patron of the Rainforest Action Network willing to foot the bill, if we would share the page with that organization’s environmental arguments for avoiding animal flesh.

It turned out that coming up with the $26,000 was not enough. We had to spend many hours with the paper’s public accountability office documenting every single one of the claims listed in our ad. Finally, the page was set in type under the banner headline: “Good News America: We Found Herb!” just in time for the Sunday edition.

Someone on the New York Times advertising staff apparently leaked what we were doing to Burger King, and the company promptly announced that they had just found their Herb and were going to introduce him at the following week’s Superbowl. And the Times was not willing to refund our $26,000.

We had one option left. We had a hunch that the character actor that Burger King hired to act as Herb was not actually named Herb, whereas we had a “real” Herb. But the NY Times typesetting shop had already closed for the evening, and our $26,000 page was on its way to the press room. 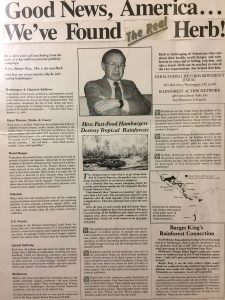 So, I grabbed a razor blade and a magic marker and manually changed the second part of our headline to read “We Found the Real Herb!”

With a full-page ad in next morning’s New York Times, we were now a legitimate news item. We had rented a hotel function room in midtown Manhattan and spent the rest of the evening hand-delivering invitations to our next morning’s news conference to all the New York news outlets (only a dozen back then).

The news conference would introduce our “real” Herb with ample identification. His reasons for not eating burgers would be amplified by Center for Science in the Public Interest Co-founder Michael Jacobson and Rainforest Action Network’s Co-founder Randy Hayes. We had the big guns.

At the appointed hour, we were all seated behind a long table and waited for the media to arrive. And waited…

We got the bad news by calling one of the supportive media reps who had promised faithfully to show up at our news conference. Once again, someone had leaked our move to Burger King. And, again, the company countered by staging their own news conference, at the same time, at one of their downtown franchises, with free food, and of course, with a preview of their celebrated “Herb” (a character actor named Jon Menick).

We decided to join the Burger King action. A couple of us went inside posing as media and asking the Burger King “Herb” for some identification proving that he was the “real” Herb. Without breaking character, he pretended not to understand our request. Our Herb and others stayed outside to do interviews with media reps departing the news conference. 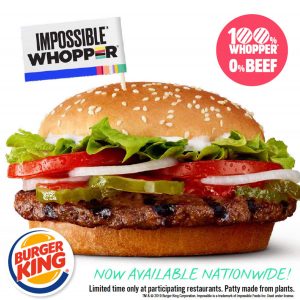 turned out to be an utter failure for Burger King, though we cannot claim full credit. Perhaps customers just preferred not to identify with the socially and mentally awkward Herb. Today, of course, no advertising agency would dare to base a campaign on such a character.

Vegan activist campaigns against major corporations continue to this day, though they were much simpler and cheaper in the 1980s.

Back then, little did we know that, 35 years hence, Burger King would be touting “0 % beef, Impossible Whoppers, powered by Impossible Foods.” Clearly, the times they’re a-changin.