If we believe that all animals are equal, then saving animals raised for food abroad should be just as worthy and perhaps even more cost-effective than saving one in the U.S.  Indeed, a number of U.S. animal organizations are heavily invested abroad. Please join us in exploring the why, who, where, and how to engage abroad for the animals.

There are lots of obvious reasons for U.S. animal organizations to engage abroad:

But the reasons were not always so 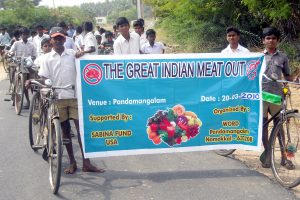 At the turn of this century, the Farm Animal Rights Movement set up the Sabina Fund to provide small grants to dozens of Indian organizations offering to conduct local observances of Meatout and/or World Day for Farmed Animals. A couple of years later, we extended our funding to the fledgling Israeli animal rights movement.

However, the past decade has seen a monumental growth in U.S engagement abroad. More than a dozen U.S.-based and other international organizations are involved.

How and Where to Engage

While the reasons for engaging abroad are pretty obvious, the restrictions in so doing are less so.

In other words, engaging abroad requires some knowledge of local language and customs, as well as infinite patience, and a large dose of good humor. 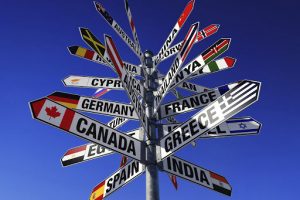 Legendary bank robber Willie Sutton once said that he robs banks, because that’s where the money is. Following that maxim, we should all be working in China. That’s truly where farmed animals are. China raises as many pigs and more farmed fish than the rest of the world combined. To make matters worse, the Chinese culture holds little empathy for animals and harbors no anti-cruelty law. Foreigners are discouraged from supporting local groups.

Fortunately, other countries, like India next door, are more welcoming, and animal consumption is rising everywhere, so opportunities for engaging abroad abound.

Organizations engaged in saving farmed animals abroad may be classified according to their respective roles as “funders,” “retailers,” or “activists.” The “funders” are wealthy individuals or foundations that actually generate the necessary funding. Some shun publicity for obvious reasons. They have recently formed a “Farmed Animal Funders” association that does not list its members.

As the name implies, that is not the case with Open Philanthropy, launched in 2014 by Facebook co-founder Dustin Moskovitz and his wife Cari Tuna. In the past five years, Open Philanthropy has donated $130 million to a number of “farm animal welfare” organizations. It’s hard to determine how much of that has found its way to other countries, but top beneficiaries – The Humane League, Mercy

for Animals, Animal Equality, and Good Food Institute all have extensive operations abroad.

The Greenbaum Foundation dispenses $4 million per year in grants to end the use of animals for food. Beneficiaries that are active abroad, include Beyond Carnism, Centre for a Responsible Future, Compassion in World Farming, Food Frontier, Good Food Institute, Mercy for Animals, Physicians Committee for Responsible Medicine, Open Wing Alliance, Proveg International, Sinergia Animal, and several smaller foreign organizations.

Another funder who prefers to remain anonymous funds the Federation of Indian Animal Protective Associations (FIAPO), Proveg International, A Well-Fed World, VegFund, a dozen Israeli organizations, and other groups that advocate animal rights and veganism abroad.

The funds generated by the “funders” may be then distributed by the “retailers” to smaller organizations and individuals abroad or used directly by the “activists” to fund their own foreign operations.

“Retailers” are organizations that convert large grants from the “funders” into smaller grants to small organizations and individuals operating abroad. Here is a sample listing:

“Activist” organizations are those having actual offices and employees conducting operations abroad. Here is an incomplete list:

In closing, we rejoice in the amazing inroads that our movement has made in saving animals abroad in the past decade. And, we apologize to folks whose good work abroad was left out by our 1000-word limit.