Every four years, presidential elections offer an unparalleled opportunity to introduce animal rights to our nation’s power brokers and the media. The process starts with the early primaries and culminates at the national political conventions. Our upcoming election offers an opportune time frame to recount our own past efforts.

In November of 1980, former California governor Ronald Reagan swept 49 states with the largest number of electoral votes in American history. Two years later, Democratic leaders scheduled an unusual midterm convention at Philadelphia’s Convention Center to figure out what went wrong and how they could do better. 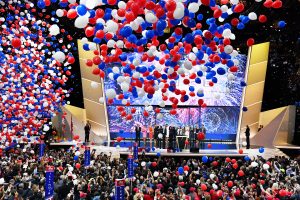 In 1981, we at FARM were still reeling from the aftermath of arranging our first animal rights conference, nurturing high ambitions for presenting our case to the American public. The 1982 Democratic convention seemed like the right forum, and Philadelphia was only three hours away.

We booked a function room right next to the convention center, publicized our evening reception throughout the convention, and prepared attractive handouts and a delightful vegan spread. Then we waited and waited for the delegates to show up.

Eventually, he did – a vegan labor union leader who patiently explained that all the delegates were being bussed to their hotels in a “safe” part of town. He advised us to pack up and take our handouts to the receptions at those hotels. He also became a valued mentor for our future ventures into America’s political process.

In the following two decades, our Compassion Campaign visited a half dozen national political conventions, which culminate every presidential election process. These events offer an unparalleled opportunity to present the case for animal rights to America’s power brokers and the media that cover them. 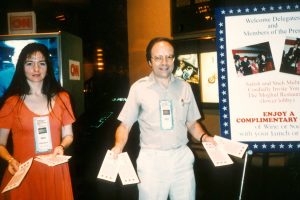 surrounded by a temporary fence defining an outer perimeter. A remote corner of the outer perimeter would have a “free speech” area, where people could advocate out of sight of the delegates and the media – obviously, not an acceptable solution.

We needed access to the actual convention center, which housed the massive evening sessions for thousands of delegates, some smaller daytime sessions, and hundreds of news organizations in the basement. That access required delegate, media, or other special credentials. Obtaining two such credentials called for advance planning and some ingenuity. With two credentials, we could then smuggle in the rest of our team, one at a time.

During the day, we would raise our issues at appropriate daytime sessions, or just leaflet inside the convention center. We would look up the name of the chief of security, so we could drop his name whenever questioned. That worked, until we were challenged by the actual chief of security. 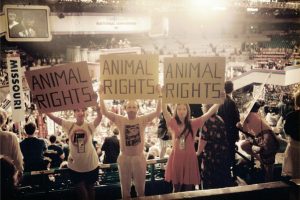 Each evening we would attend the massive evening session, with thousands of delegates, but only in the remote, unlit upper tiers, where no one would see the signs we had carefully wrapped around our bodies to get them past security.  Some of the times, we were able to work our way down briefly to display our signs in the brightly lit delegate sections, where they could be seen by TV cameras.

But tight security at the 1996 Republican convention in San Diego would not allow that.  As I was sitting in the upper unlit section, I noticed the thousands of balloons up in the rafters waiting to be released on the last day upon conclusion of Bob Dole’s acceptance speech. It occurred to me that balloons are supposed to go up – not come down. And that provided a solution to our sign visibility problem.

Our signs would have to be large enough to be seen from far away, yet light enough to be supported by a couple of toy balloons. We spent the next morning experimenting in our hotel room. 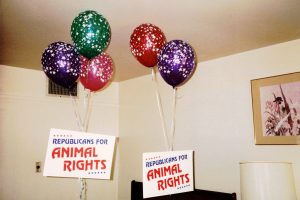 Only one of our two sets of balloons made it past security that evening, along with the sign hidden under our jacket. But that sign, proclaiming “Republicans for Animal Rights,” floated bravely up to the rafters, where it could be seen by thousands.

A national political convention would draw 5,000 delegates, but three times as many media representatives. They were all under considerable pressure to file news stories in a setting that does not generate much news. Their little cubicles in the basement of the convention center would welcome news releases and an occasional interview.

In order to be considered seriously, our news release had to fit within the media’s current mindset. The concept of animal rights did not, but health and environmental consequences of animal 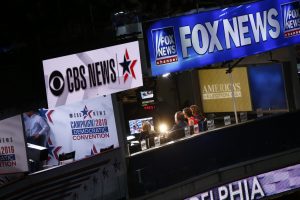 agriculture did. So did opposition to animal cruelty and agricultural subsidies. Then it was just a matter of finding an appropriate hook like mention of the topic in one of the many convention events.

Each evening, we would review the day’s events and start writing. The following morning, we would distribute pertinent news releases to the hundreds of news media cubicles.

And There Was More…

One year, we decided to go visit Iowa and New Hampshire during their early primaries. Here, the events were less well attended, and presidential candidates and covering media were relatively more accessible to our message.

At the 1988 Democratic National Convention in Atlanta, we recruited TV celebrity Casey Kasem to address visitors at the “free speech” zone. At this same memorable event, a couple of high party donors allowed us to reach a number of top media and Democratic power brokers in 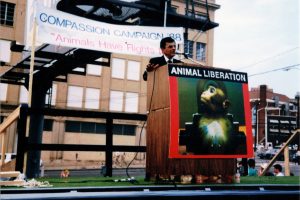 person by giving us their passes to the evening’s VIP receptions.

Former California governor Jerry Brown led a large delegation to the 1992 National Democratic Convention in New York, including our labor union friend from the 1982 event in Philadelphia. With his assistance, we came very close to getting an animal rights plank in the Democratic platform. At the evening session, he and his fellow delegates did a conga dance holding up our animal rights signs on the very floor of the convention, for the most spectacular TV exposure in our political convention experience.