World Day for Farmed Animals is coming up in two weeks, on October 2nd. The observance was conceived in 1983 and celebrated throughout the world each year since then to memorialize the billions of animals slaughtered for food. Farm Animal Rights Movement has led the way. Here’s how.

In the early 1980s, I heard an apocryphal tale of a barbaric tribe with a gruesome penal code. Depending on the gravity of the offense, the offender could be beaten, lose a limb, or even be killed. In case of an extreme offense, the offender’s dead body could be actually consumed, to remove all traces of their existence.

It struck me as exceptionally barbaric 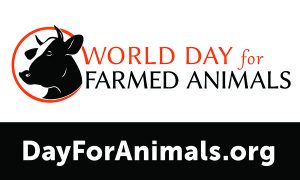 that we would inflict such extreme punishment on cows, pigs, turkeys, chickens, and other sentient animals who had caused us no harm whatever. I knew back then that the struggle to stop the use of animals for food would take many years, perhaps beyond my own lifetime. But there was one small step that we could take right away.

That first year, we parked a moving van with a public address system on Washington’s National Mall and staged a mock funeral for farmed animals, with PeTA’s Ingrid Newkirk addressing a small assembly of local activists. Indeed, many early observances involved mock funeral processions, with participants dressed in black and bearing a black cardboard coffin. 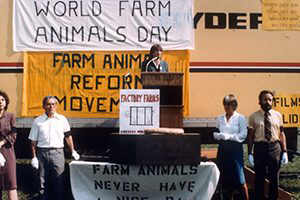 Signage has always played an important role. In 1997, we had four teams pasting hundreds of posters on traffic light switch boxes throughout downtown DC. In other years, we would hold up huge signs along commuter routes during rush hours or hang home-painted banners on highway overpasses. Once we had a budget, we were able to contract for outdoor billboards and bus cards with pictures of farmed animals proclaiming “Be Kind to Animals – Don’t Eat Them” or “Save Some Lives – Theirs and Yours.”

The U.S. Department of Agriculture, located on the National Mall in Washington has always been our favorite target for displays and vigils. After being ignored for several years, we decided to try and get their attention.

In 1988, eight of us, including a mom with her six-year-old, staged a sit-in in the office of the Secretary of Agriculture. It got us a meeting with his chief deputy, where we laid out our case. A couple of years later, five of us blocked the main entrance to the USDA headquarters building. 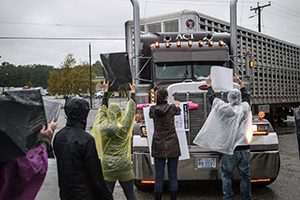 outside our Washington comfort zone and visit a sheep slaughterhouse in nearby Timberville, VA. When we arrived, we found that the slaughterhouse was struck by union workers, so we invited them to a vegan picnic at a nearby public park, where we shared our views on killing animals for food.

Three years later, we traveled to a pig slaughterhouse in Smithfield, VA, where we staged an-all-night vigil, then blocked trucks loaded with pigs from entering the plant. We went back there three more times. At the 2015 blockade, I was almost run over, as I sat on the ground in front of the truck.

On the West Coast, we staged the first ever vigil at the Farmer John pig slaughterhouse in the Vernon neighborhood of Los Angeles. That vigil began with an assembly at the Vernon police station and a march through Vernon to the slaughterhouse. Access to the live auction in nearby Petaluma was blocked by local activists on several occasions.

Several other countries have participated actively in World Day for Farmed Animals through the years. 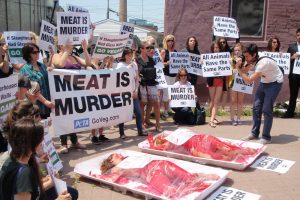 This Year, Internet, and Social Media

With the advent of the Internet at the turn of the century, World Day for Farmed Animals acquired an impressive website.  The website describes the various options for local observances. It also cites the devastating impacts of animal agriculture on animals, on public health, and on our environment, including global warming. 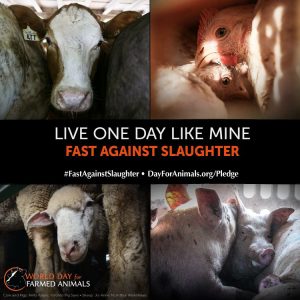 thoroughly revised to ensure that all options are COVID-compliant. The website offers professionally designed memes that can be shared on social media platforms, as well as a list of educational films that showcase the truth about animal exploitation. Local activists are encouraged to “fast against slaughter” and to post a photo of themselves with a sign, or a brief video, explaining why they are fasting on October 2nd.