Conferences have proven to be the most effective vehicle for forming, shaping, and nurturing our movement. They offer documentation of animal abuses, activist training, and lots of inspiration and networking opportunities. They have been a boon to our movement.

The conference that laid 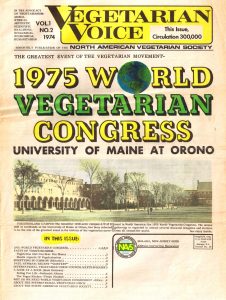 the foundation for our movement was actually not about animal rights. It was the World Vegetarian Congress held on August 16-28, 1975 at the University of Maine campus in Orono (ME). Although most presentations dealt with diet and health, some addressed animal abuses. The Congress launched the U.S. vegetarian movement, leading to the formation of 60 local groups. It inspired a number of us to lead a future animal rights movement.

In the wake of the Congress, I launched the Vegetarian Information Service to disseminate information on the benefits of vegetarian eating. I also arranged a couple of small vegetarian conferences. This is where I met folks who had read Peter Singer’s recently published Animal Liberation and were eager to promote animal rights ideology. Although I didn’t fully understand the concept, I was impressed by their enthusiasm and the fact that they also opposed the use of animals for food. Was there a way of combining their small numbers and boundless enthusiasm with the large number of social vegetarians spawned by the World Vegetarian Congress?

There was only one way to find out. In August of 1981, I organized a conference called Action For Life on the campus of Cedar Crest University in Allentown (PA), to determine whether vegetarian and animal rights activists could work together. The conference led to the formation of PeTA, FARM, and several other groups. It became the launching pad of the U.S. animal rights movement.

The Second Team Enters the Field

One of the organizations formed in the wake of our 1981 conference was The National Alliance for Animal Legislation, offering annual legislative training seminars for animal activists. By 1987, the event had grown in size and scope to become a full-fledged annual conference that eclipsed our Action For Life events. The sponsoring organization had been taken over by past FARM employee Peter Gerard (formerly Peter Linck) and renamed National Alliance for Animals. 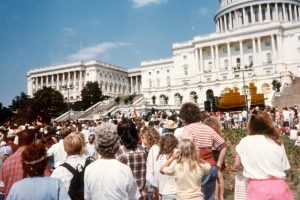 place of the annual conference, Peter staged the March on Washington, our movement’s largest event, with 25,000 participants and sponsorships by nearly every animal organization. Participants visited displays and listened to some speeches on the Ellipse, adjoining the White House, then marched, chanting slogans, to the West Side of the Capitol for more speeches.

The annual conferences continued through 1995, attracting nearly a thousand participants.

In 1996, Peter attempted to combine the annual conference with a second March on Washington. The estimated attendance of 3,000 was great for a conference, but disappointing for the sponsors who had paid substantial fees and printed special handouts for the expected 25,000 marchers. Peter could not bear the multiple vicious attacks on his character and leadership. In mid-December, he called to inform me that he was dissolving his organization, stopping the conferences, and dropping out of sight – a huge loss for our movement. 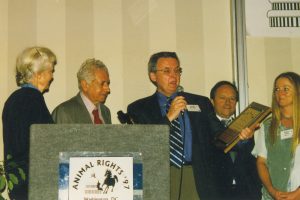 It occurred to me immediately that the disappointing march turnout, followed by cancellation of the national conference, would have a disastrous impact on our movement’s morale. Although I had given up conference organizing ten years earlier, I was also the only movement leader in a position to do one on such short notice. I took up the challenge and organized a 1997 conference in suburban Washington DC, fully expecting that other organizations would step in in 1998 and 1999… But no one did.

Then, Y2K happened. All computers were supposed to stop working at the stroke of midnight on December 31, 1999. Prophecies ranged from the second coming to impending apocalypse. People were planning all kinds of strange things. But no one had planned to do an animal rights conference. So, I did it again. And kept doing it, until two years ago when, at the ripe age of 84, I turned over the reins to my long-term associate Jen Riley.

At a 2002 plenary session, the MC referred to a female speaker’s great shape, leading a dozen attendees to mount the stage in protest. In 2003 and several subsequent years, other animal advocates attempted to borrow our attendees for conflicting presentations or outside events. One year, a small group of animal activists actually disrupted a plenary session and damaged some exhibits, because they did not like our program.

animal rights conferences had been held in the Washington DC area. We didn’t know whether the West Coast would support such an event and were afraid to lose the proven East Coast attendance in trying. In a 2003 fit of madness, I arranged two conferences one month apart, in Washington and Los Angeles. Both events proved highly successful, leading us to alternate between those two cities in subsequent years.

In 2004, The Humane Society of the U.S. led a permanent exodus by five major sponsors to protest a couple of our more radical speakers. They organized their own biennial conference called Taking Action For Animals, no longer active. PeTA withdrew sponsorship for a decade because attendees criticized their extreme dog and cat policies.