In 1977, four years before our movement’s historic first conference, pioneer grassroots activist Henry Spira forced the American Museum of Natural History in New York to shut down cat blinding experiments. He accomplished this through constant picketing and applying pressure from wealthy donors, with no organization, no treasury, and no staff. 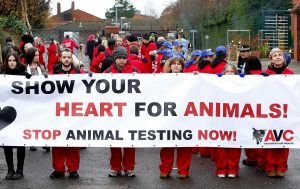 Research. The resultant media coverage placed animal rights and his student group People for the Ethical Treatment of Animals in our nation’s consciousness.

For the next three decades, pretty much all animal rights outreach was organized and manifested at the grassroots level, through rallies, marches, pickets, and information tables. National organizations, with skeleton staffs and limited funding, relied largely on grassroots volunteers.

Early on, we determined that grassroots campaigns would be more effective if planned well in advance and with some regularity.

In 1983, we arranged the first annual observance of World Farm Animals Day. The purpose was to mourn and memorialize the world-wide suffering and slaughter of billions of innocent sentient animals for human gluttony. The date selected was October 2nd – birth date of Mahatma Gandhi, world’s foremost champion of farmed animals. 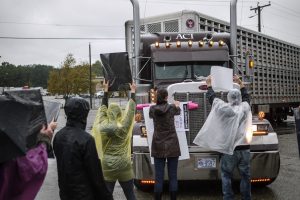 Many early observances involved mock funeral processions, displays, or information tables at government offices, slaughterhouses, or fast food restaurants. Our activities in the nation’s capital  included a mock slaughter line, a mass “die-in,” a hunger strike in a veal crate, and a sit-in in the Secretary of Agriculture’s inner office. Some years, we attempted to stop trucks bringing pigs and lambs to Virginia slaughterhouses. We organized the first ever march and picketing at the infamous Farmer John slaughterhouse in Los Angeles.

1985, on the first day of Spring – March 20th, with information tables in busy urban areas, urging passersby to sign a pledge. A weekly e-newsletter called Meatout Mondays offered a pertinent news item, a human interest story, and a vegan recipe.

As Meatout expanded, at the turn of this century, we launched annual receptions for Members of Congress and their staff. We got dozens of governors and mayors to proclaim March 20th the Great American Meatout Day in their jurisdictions. We bought discounted billboard and bus card space with the slogans “Kick the Meat Habit” and “Let’s Save Some Lives – Yours and Theirs.”

Decline of the Grass Roots

Two crucial factors contributed to the radical decline of grassroots activism in our movement toward the beginning of the last decade.

This is when big money started flowing into our movement. Organizations like Mercy for Animals, the Humane League, and Animal Equality mushroomed from a handful of overworked activists to large organizations with staffs numbering in the hundreds. Nearly all the new hires came from the grass roots, virtually snuffing out local activism.

At about the same time, the growing availability and popularity of Facebook and other social media platforms had a mixed effect on grassroots activism. On one hand, it facilitated coordination of grassroots outreach. On the other, it encouraged some activists to waste valuable time posting images of the latest animal atrocities and bashing each other’s activities.

Despite its decline, grassroots activism continues to play a role in our movement. 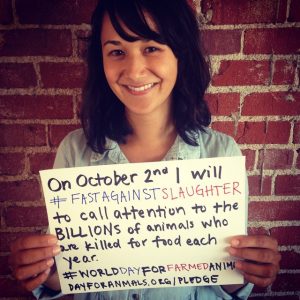 Other organizations have moved their grassroots outreach on line. World Farm Animals Day urges local activists to fast on October 2nd and to post online pictures of themselves with a sign noting why they are fasting. Veganuary, out of United Kingdom, asks individuals to go vegan for at least the month of January.