Language and rhetoric are the fundamental tools of any advocacy. Language refers to our choice of words and expressions. Rhetoric is the art of shaping our message in a persuasive manner. Here is an introduction to how these tools can serve vegan advocacy.

The animal exploitation industries have long used language to hide their insults to human sensibilities. This is why they label the animals they abuse and kill for food “livestock,” “cattle,” “hogs,” “swine,” and “poultry.” This is why they refer to the flesh of cows, pigs, and dairy calves as “beef,” “pork,” and “veal.” This is why they tout their products as “humane,” “cage-free,” or “free-range.” Our role should be to discourage the use of all this deceptive language, as in “I don’t eat cows.”

As vegan advocates, we should restore the original meaning of “meat” and “milk” by simply prefacing each term by a noun denoting the source, as in “animal meat,” or “soy meat,” and “cow milk” or “nut milk.” Moreover, we should refrain from deligitimizing plant-based products by labeling them as “fake,” “mock,” “analogs,” “alternatives.” These are real foods that don’t require qualifying labels!

Deception designed to salve human sensibilities prevails in other animal exploitation industries as well. The biomedical industry refers to animals used in research

and testing as “specimens” or “models.” They “sacrifice” animals rather than subjecting them to a painful and prolonged death. Pounds don’t kill unwanted dogs and cats. They just “euthanize” them, or “put them to sleep.”

Animals living free are referred to as “game” then “harvested” by hunters. Killing of aquatic organisms for amusement, is called “sport” fishing.

In all these cases, we should refuse to participate in the deception and use  appropriate language to describe the victims and their abuse.

We sometimes inadvertently sabotage our own vegan advocacy by making veganism sound alien or challenging. Here are some remedial tips:

Social frames are the mental lenses through which we perceive the world around us. They are shaped by our social and personal norms, including our experiences, stories, and stereotypes. They help us interpret and accept all communications. Rhetoric is the art of shaping our advocacy to fit within our audience’s social frames.

To penetrate and become accepted by the audience’s social frames the messenger must be credible, likable, and similar to the audience and the message must be similar to what the audience already believes. The following starting positions are pretty safe with most audiences:

The Best Speech Ever 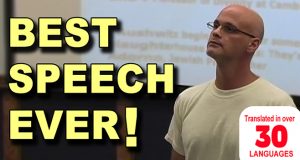 In 2011, two young Israelis – Hovav and Dani, set out to promote effective vegan videos on social media. They soon came across the video of a 2010 lecture delivered by American vegan activist Gary Yourofsky at Georgia Tech. They immediately recognized its rhetorical power and began promoting it intensively as “the best speech you will ever hear.”

The results were electrifying. Israel became the world’s most vegan nation per capita. The 70-minute video has had nearly 5 million views, with translations into 30 languages.

Let’s take a closer look at some of the dozens of rhetorical devices that Gary uses so effectively to penetrate his audience’s social frames and deliver his message.

He starts by gaining their acceptance and trust:

I am not trying to take you away from your friends, your religion, your politics and your patriotism. You can still watch your favorite TV shows and listen to your favorite music.

And, now, he is ready to deliver his message. First, an appeal to feelings:

All I want to do is awaken some emotions and some feelings, that has been buried and suppressed, intentionally, by our society. Each and every person in this room used to be a true animal lover at one time. What in the hell happened along the way? Who taught us to be so mean, and nasty and vicious and hateful towards animals when they used to be our friends? You’ve been duped. They’re killing you, they’re killing the animals, and they’re killing this planet.

Then an appeal to beliefs:

If you believe that humans are meat eaters, I’ll give you two challenges to prove me wrong. I want you to go outside and locate a squirrel on campus, chase that squirrel down, pounce on him and catch him in your mouth. Then, eat the squirrel. Eyes, nose, face, toes, tail, anus, inner organs, blood, fur and don’t forget about the brains. And challenge number two, find a two-year old child, place the child in a crib, in the crib put two things, a live bunny rabbit and an apple. If the child eats the bunny rabbit and plays with the apple, I’m gonna buy everyone in this room a brand new car.

A rapid-fire listing devices, with a touch of absurdity: 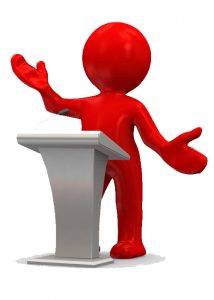 You got a choice when you leave this room, you can choose to be radically kind – never to intentionally harm another animal for breakfast, lunch, or dinner. These creatures have never harmed you, violated you, or taken advantage of you in any shape or form. The least you can do is return the favor. Or you can stay radically cruel, make sure animals have no freedom, make sure they never experience one drop of human kindness, make sure their babies are stolen from them, make sure their beaks are sliced off, their horns cut off and their testicles are ripped off. I really hope you make the right choice.

Gary’s full speech may be viewed at
https://www.youtube.com/watch?v=es6U00LMmC4.
As you watch it, you may want to pause after each rhetorical device and consider whether and how it would work for you.