Human behavior, including what we eat, is dictated by our community’s powerful social norms. These norms are shaped by our collective needs, desires, and morals, but also by powerful commercial interests, public officials, and other opinion leaders. Getting our society to embrace a vegan lifestyle requires an understanding of the challenging process of social change.

Social change tends to occur in three or more stages, defined by what people know about the need for change and how they feel about it. For the purpose of this discussion, we will refer to an alerting, a discussion, and a reform stage. 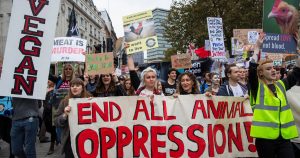 In the alerting stage, people are not aware of any need for change. Examples within the animal rights sphere are “sport” fishing, zoos. and research on mice and rats. Our role, as activists is to call public attention to the need for change through demonstrations, marches, disruptions, and street theater.

Transition to the discussion stage may be precipitated by tipping points – typically books or documentaries that radically stimulate public interest and discussion. Publication of The Jungle by Upton Sinclair in 1905 first alerted the public to the revolting conditions in American slaughterhouses and led to creation of the Food and Drug Administration. The 1962 publication of Silent Spring by Rachel Carson laid the groundwork for the environmental movement.

In the discussion stage, people show interest in the proposed change and seek more information. The vegan lifestyle is definitely in this stage. So are environmental/economic damages of animal agriculture, fur, and research on dogs and primates. Our obvious role is to provide the information in the form of leaflets, food samples, lectures, videos, and social media posts. This is not the time for confrontations, disruptions or other ways of discomforting the public.

In the reform stage, most people agree with the need for change, but substantial, lasting reforms are lagging behind. Salient examples are plant-based eating and animal abuse in factory farms and slaughterhouses. This is where court challenges and lobbying for legislative, executive, and institutional reforms are most likely to bring results. Good examples are the massive social changes wrought by the 1973 Roe v. Wade Supreme Court decision and the 1964 Civil Rights Act.

On the Other Hand …

Some monumental social reforms have taken place without undergoing the lengthy alerting and discussion process. Here are a few examples:

Gay acceptance. In 1996, vast majorities in both houses of Congress enacted the Defense of Marriage Act, which invalidated gay marriages.  Two decades later, a gay man is a leading contender for president of the U.S. and gay marriage is legal in every state. According to the fascinating Coming Out article in Wikipedia, the gay community accomplished all this in record time simply by coming out of their closets and forcing society to deal with it. 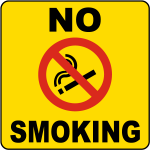 Anti-smoking campaigns. Conclusive documentation of the link between smoking and lung cancer was published in 1952. For the next 50 years, health authorities attempted to curb smoking by forcing graphic warnings on cigarette packages, banning advertising, and raising excise taxes, all to no avail. What finally worked was turning smoking into an anti-social activity through gradual isolation and eventual eviction of smokers from airliners, restaurants, and other public accommodations.

Technological breakthroughs have been a boon to animals as well. The invention of the telegraph freed hundreds of thousands of messenger pigeons. The production of kerosene eliminated the market for whale oil and the associated slaughter of sperm whales. The development of steam and internal combustion engines spared millions of horses, mules, and other equines from backbreaking labor. Development of computer models saved thousands of animals from painful and deadly experiments. 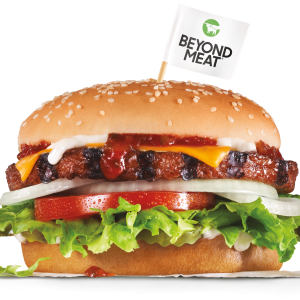 In the next 20 years, development of plant-based meats and dairy products will liberate billions of chickens, turkeys, pigs, and cows from factory farms and slaughterhouses. When people no longer use animals for food, they will be happy to actualize their natural affinity toward animals by supporting our animal rights ideology.

In the meantime, each of us can help speed the advent of this massive national food system reform and save more animal lives by demanding more plant based options in our company cafeterias, schools, supermarkets, and favorite restaurants.

(In future essays, we will explore personal advocacy, online advocacy,
corporate campaigns, and the role of language and rhetoric.)