I have been championing animal rights since organizing the first national animal rights conference in 1981. But how do I explain this concept to my neighbor? And how about the social contract? Is animal rights about them or about us? And what about saving animal lives?

A Bit of History 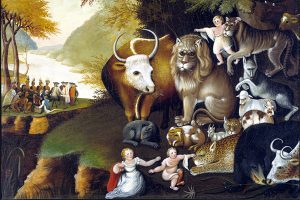 playwright, pacifist, and social reformer, Brigid Brophy penned an editorial entitled The Rights of Animals in the prestigious London Sunday Times. The editorial proposed that recent efforts to expand human rights be extended to sentient animals and is generally credited with launching the concept of animal rights in the Western world.

In the early 1970s, a group at Oxford University became intrigued by Brophy’s editorial. They coined the term “speciesism,” to denote a prejudice toward non-human animals based on morally irrelevant physical differences. And, they compiled 13 essays on the intriguing new concept in the book Animals, Men & Morals.

One of the Oxford group, Australian philosopher Peter Singer, published a review of Animals, Men & Morals in the prestigious New York Review of Books and was invited to teach a course on animal rights at New York University. The lesson plan became the core of Singer’s celebrated – Animal Liberation – published in 1975.

Singer’s book is generally credited with launching a fundamental re-examination of the status of animals. It was largely based on the concept of utilitarianism, which seeks to minimize suffering for the greatest number of sentient beings. However, the concept of animal rights, as we understand it today – that all sentient beings are entitled to equal moral consideration – was actually introduced in Tom Regan’s 1983 book The Case for Animal Rights.

What Are Animal Rights?

All societies, both human and animal, must maintain certain rules of behavior, or social norms, in order to survive. Among animal societies, these norms are frequently based on physical strength. gender, and age. In human societies, it gets more complicated. Every member of a society is expected to abide by these norms in what sociologists refer to as a “social contract.” Clearly, animals who live in groups are definitely capable of abiding by their own social contracts.

The more pertinent question is whether animals can abide by social contracts with humans. Our family dog certainly knows when it’s time to eat, where to relieve himself, which couch to sleep on, and how to act when we come home. Our cat – perhaps less so. But setting up similar arrangements outside our home and with so many animals living in our midst, including deer, bears, raccoons, rats, and mice, appears extremely unlikely. And so does the prospect of redressing any grievances before human courts.

Then, what is the practical meaning of animal rights, and how do we apply it to our lives? The answer is as simple as it is powerful: it’s not about them – it’s about us. Animal rights is a euphemism for our determination to treat the most vulnerable, and therefore, the most oppressed sentient beings on earth with the same kindness and respect that we would accord to other human beings. The social contract to do so is with ourselves – not with the animals.

The animal rights movement shares the vision of a world where animals are no longer exploited for food, experiments, clothing, amusement, or any other form of human greed. The rights we seek for animals are primarily the right to life, bodily integrity, and freedom of movement. The Declaration of Animal Rights signed by 50 organizations at the 1990 March on Washington says as much.

Some of us view animal 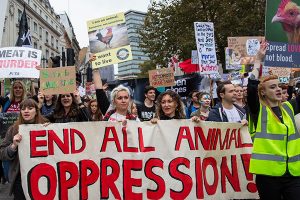 rights as a logical extension of our struggles for human rights. But it’s more complicated.

All recent victories for human rights only asked people to stop oppressing certain members of our society. There was never any question about the victims’ life, bodily integrity, and freedom of movement, and no demand for fundamental lifestyle changes.  Ours is the only social struggle since the 1863 Emancipation Proclamation, which makes similar demands.  That struggle cost an estimated 600,000 lives.

Moreover, ours is the only case where the victims can not participate in their own redemption. In our eyes, this makes our struggle even more noble. But, other social justice advocates may view our struggle as attempting to compare the moral value of our victims to theirs and take great offense.

Because of these concerns, some animal rights advocates feel that animals are best served at this stage by directly reducing their numbers in the food stream, rather than by promoting the animal rights ideology. This requires nothing less than a massive reform of our national food system to replace animal-based food products with plant-based ones.

Such reforms must address supply, replacement, distribution, and demand sectors of our food system. 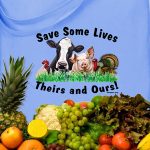 The conflict with animal rights arises because food reform involves winning over and working with people who have no interest in animal rights, are only motivated by the profit potential, and may even still be engaged  in abusing and slaughtering animals. It’s a bit like working in a slaughterhouse to gather undercover evidence, but on a much larger scale.

In the past couple of years, several outstanding leaders of the animal rights movement have elected to forgo promoting animal rights in order to save animal lives through the food reform process.

The invention of the telegraph freed hundreds of thousands of messenger pigeons. The production of kerosene eliminated the market for whale oil and the associated slaughter of sperm whales. The development of steam and internal combustion engines spared millions of horses, mules, and other equines from backbreaking labor.

In the next 20 years, development of plant-based meats and dairy products will liberate billions of chickens, turkeys, pigs, and cows from factory farms and slaughterhouses. Once people have largely stopped using animals for food, they will be happy to actualize their natural affinity toward animals by supporting our animal rights ideology en masse.