It was a beautiful day in Washington in early September of 1975. I was still flush with excitement from having attended my first World Vegetarian Congress in Orono, Maine. That’s where I decided to devote the rest of my life to ending the use of animals for food. That’s  also where I met Nellie “Saiom” Shriver, who was to become my mentor in vegetarian activism.

The phone rang. It was Nellie calling from Akron, Ohio. She informed me that the owner of Siddhartha, a vegetarian restaurant on New York Avenue, near the White House, was desperately seeking someone to help arrange a public vegan Thanksgiving dinner in his restaurant.

I jumped at the opportunity. This would be my very first act of vegan advocacy. I organized, and I publicized. I staged a comedy act with my 9-year-old daughter, and I recruited a vegan runner from Philadelphia to win the local Turkey Trot foot race (refusing a turkey carcass as his prize). 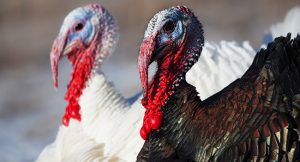 My organization, the Farm Animal Rights Movement, or FARM for short, has sought to promote the turkey-free Thanksgiving tradition ever since, mostly because the national observance is so tethered to the carcass of a dead animal. Our Gentle Thanksgiving website lists all the reasons for shunning turkey carcasses on Thanksgiving, offers a good variety of appropriate plant-based recipes, provides guidance for celebrating with a turkey-addicted family, and encourages viewers to arrange their own public Thanksgiving dinners in partnership with their favorite vegan-friendly restaurant. 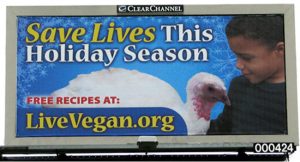 Several years ago, FARM expanded the scope of our observance and the associated website to other popular holidays following Thanksgiving. Our Compassionate Holidays website now also covers Christmas and Hanukkah (Dec 22-30), with plant-based recipes suited to each observance.

Every year, we write letters noting the absurdity of killing an innocent animal to celebrate our own life, happiness, and good fortune to the editors of hundreds of America’s newspapers. In some years, we’ve even put up public billboards.

When the National Turkey Federation began staging their annual presidential turkey “pardons” in the late 1980s, we seized on the occasion to picket the White House ceremony. This became much more relevant in November of 2017, in the face of widespread rumors that President Trump was considering a pardon for recently indicted campaign chairs Paul Manafort and Rick Gates. We arranged a two-day White House vigil with giant posters picturing a wild turkey and the admonition “Pardon Only the Innocents, Mr. President.” Our mobile billboards with the same message circled downtown Washington.

In 1995, vegan Thanksgiving dinners received a welcome boost from the commercial appearance of Tofurky, a ready-to-eat animal-free roast created by an ingenious entrepreneur named Seth Tibbott. This meant that any vegan advocate, with no culinary skills, could now show up at their family dinner and share their own cruelty-free roast. Hopefully, this could replace those excruciating, depressing discussions about the absurdity of killing an innocent animal to celebrate our own life, happiness, and good fortune.  Because of the item’s popularity, other commercial producers soon followed suit, including Field Roast, Gardein, Herbivorous Butcher, and Trader Joe’s.

So, when you sit down to your own vegan Thanksgiving dinner this year, you may wish to share the story of how this valiant ethical tradition began in 1975 with an idea and two well-placed phone calls by a young vegan advocate from Akron, Ohio.