Exploitation of animals in the name of science came much later in the history of human civilization than their exploitation for labor, religious sacrifices, and food. Despite a few sporadic reports of animal experiments dating back to the 4th century BCE, the advent of vivisection is generally associated with William Harvey’s discovery of the circulation of blood on live animals in 1616.

Harvey’s work demonstrated the similarity of human and animal anatomy and physiology. This created a problem for French philosopher Rene Descartes, who was championing Aristotle’s and the Catholic church’s creed that animals were mere objects created for human use. He rebutted that, despite their physical and behavioral similarities, animals lack a soul which houses both abstract intelligence and sentience. He compared animals to the elaborate mechanical clock mechanisms popular at the time.

In the 18th and 19th centuries, France became home to atrocious experiments on conscious horses, dogs, and other animals, led by Louis Pasteur, who developed anthrax and rabies vaccines.  The infamous François Magendie used six-week-old conscious puppies to identify the different functionalities of dorsal and ventral spinal nerves. Millions of animals were sacrificed in the discovery and testing of vaccines against diphtheria, tetanus, tuberculosis, polio, and other dreaded human diseases.

The anti-vivisection movement and associated legislation got their start in England. By the 1860s, the RSPCA, with support of British medical societies, condemned painful experiments, but approved those performed under anesthesia. The 1876 Cruelty to Animals Act that followed allowed painful experiments only when “absolutely necessary. “

Opposition to the use of animals in medical research first arose in the United States during the 1860s, when Henry Bergh founded the American Society for the Prevention of Cruelty to Animals (ASPCA). In 1883, Caroline Earle White founded the American Anti-Vivisection Society (AAVS), first to regulate vivisection, then to oppose it altogether.

The most sweeping legislation to regulate vivisection in the U.S. has been the 1966 Laboratory Animal Welfare Act. The Act explicitly requires that any painful procedure be performed with tranquilizers, analgesics, and anesthetics, except when their  exclusion is “scientifically necessary.” The Act’s protection excludes birds, rats, mice, farmed animals, and all cold-blooded animals.

Opposition to vivisection was actually responsible for launching the U.S. animal rights movement in the late 1970s and for dominating the movement for nearly 20 years. Until 1995, Farm Animal Rights Movement (FARM) was the only national organization dedicated to farmed animals.

Social justice activist Henry Spira stopped cat blinding experiments by New York’s American Museum of Natural History in 1977. Two years later, he got New York State to repeal its “pound seizure” law that forced local shelters to give up its animals for research. By 1981, he had shamed major cosmetic companies to pledge millions of dollars for animal-free alternatives to cruel animal tests.

In 1981, Alex Pacheco showed photos and videos of monkeys victimized by the Institute for Biomedical Research to media guru Cleveland Amory, launching both his fledgling student organization (PeTA) and the animal rights movement into the national consciousness. In the next two years, Richard Morgan and his Mobilization for Animals (MFA) recruited thousands for massive protests at the four national primate research centers, as well as in New York and Washington. 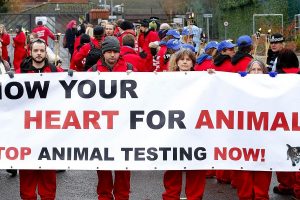 The number of animals affected can not be calculated with any precision, because most are excluded from the protection and accounting of the Laboratory Animal Welfare Act.

[Most of the material for this article has been abstracted from the scholarly masterpiece
The Longest Struggle (2007) by historian Norm Phelps and from
Wikipedia articles on “Vivisection” & “Animal Testing.”]