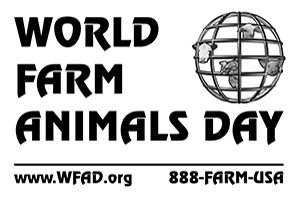 Back in the early 1980s, shortly after I committed my life to stopping the use of animals for food, I heard an apocryphal tale of a barbaric tribe with a gruesome penal code. Depending on the gravity of the offense, the offender could be beaten, lose a limb, or even be killed. In a few extreme cases, the offender’s dead body could be roasted and consumed, to remove all traces of their existence.

It struck me as exceptionally barbaric and outrageous that we would inflict such extreme punishment on cows, pigs, turkeys, chickens, and other sentient animals who had caused us no harm whatsoever. 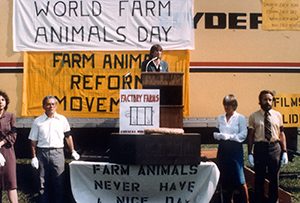 I knew back then that the struggle to stop the use of animals for food would take many years, perhaps beyond my own lifetime. But there was one small step that I and my fellow activists could take right away.

That first year, we parked a moving van with a public address system on Washington’s National Mall, staged a mock funeral for farmed animals, and had PeTA’s Inrid Newkirk address a small assembly of local activists. Indeed, many early observances involved mock funeral processions, with participants dressed in black and bearing a black cardboard coffin. In Washington, we held vigils in front of the U.S. Department of Agriculture. In other cities, there were vigils at meat industry gatherings and meat markets, in other cities. There were also the usual information tables.

Eventually, we became bolder and more creative. Our USDA vigils gave way to a mock slaughter line, a mass “die-in,” a hunger strike in a veal crate, and a sit-in at the Secretary of Agriculture’s inner office. Some years, we got ourselves arrested attempting to stop trucks bringing pigs and lambs to slaughter-houses in Smithfield and Timberville, VA. We organized the first ever march and siege of the infamous Farmer John slaughterhouse in Los Angeles. 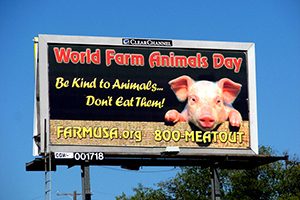 Once we had a budget, we were able to launch paid outdoor billboards and bus cards, featuring pictures of farmed animals and proclaiming “Be Kind to Animals – Don’t Eat Them” or “Save Some Lives – Theirs and Yours.” Groups without a budget would just hang home-made banners from highway overpasses. We also printed and distributed signs, posters, brochures, and leaflets to local activists staging events around the country.

With the growing popularity of social media, World Day for Farmed Animals acquired  an impressive Facebook page and a personal form of commitment. Lone activists are encouraged to “fast against slaughter” on or about October 2nd and to post a photo of themselves with a WDFA sign, or a WDFA meme, or a 4-minute video promoting harmless, plant-based eating.

Each of us is honor-bound to devote at least one day a year to memorializing the billions of farmed animals who suffer and die for human gluttony. For additional information on what you can do, please visit our website by clicking the link below.