The role of animals in prehistoric diets is still the subject of lively debate. Even the Bible has it both ways. Animal sacrifices, associated with domestication of animals and consumption of animal flesh, date back to at least 3,000 BCE. 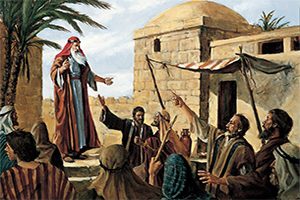 Beginning around 780 BCE, Israel’s Prophets Isaiah, Jeremiah, and Hosea condemned animal sacrifices and consumption of animal flesh. Much later, Jewish sages formulated rules of kashrut that permitted consumption of some animals, provided that they were raised and slaughtered with minimal cruelty.

Founder of Jainism – Verdamana Mahavira (599-527 BCE) and Greek mathematician and philosopher – Pythagoras (570–495 BCE) were among other notable early leaders urging their followers to abstain from eating animals. For a couple of millennia, abstinence from meat was called the Pythagorean diet.

Greek philosopher Plato (425-347 BCE) propagated the Pythagorean view, but his star pupil Aristotle (384-322 BCE) opposed it, proclaiming that animals exist for the sake of humans. The Aristotelian view of animals was reaffirmed and perpetuated by Christianity for the next two millennia.

The modern concept of vegetarianism emerged with founding of the British Vegetarian Society in 1847. British social advocate Henry Salt published A Plea for Vegetarianism and Other Essays in 1886. British pacifist Donald Watson coined the term ”vegan” and launched the Vegan Society in 1944.

The Rise of Factory Farming 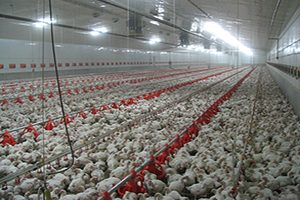 Massive availability of cheap antibiotics in the early 1950s allowed packing tens of thousands of “broiler” chickens and turkeys indoors, without access to fresh air or sunshine, where they could be fed mechanically. Feed formulations were developed to make them grow faster.

These facilities have been dubbed “concentrated animal feeding operations (CAFOs)” by their proponents and “factory farms” by their opponents. They reduced substantially the price of animal food products and increased accordingly the number of animals raised for food.

“Battery cages,” in factory farms are stacked on top of each other, to house the maximum number of “layer” hens, with conveyer belts providing feed and collecting eggs. The birds’ beaks are seared off to prevent stress-induced pecking. Male chicks are ground up alive or simply discarded to suffocate slowly in large plastic garbage bags, because they don’t lay eggs. 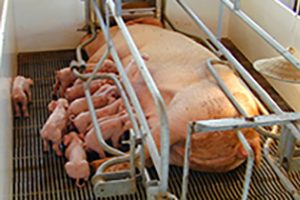 Breeding sows are artificially impregnated and immobilized in “gestation crates.” They give birth and nurse their babies for a couple of weeks in restrictive “farrowing stalls.” The babies are fed an artificial formula, then moved to solid food in filthy crowded pens. They are slaughtered at barely six months of age.

Dairy cows spend their entire lives chained on concrete floors and milked by machines twice a day. They are artificially impregnated each year, and their babies are torn from them at birth to prevent any bonding that may affect milk production. Newborn females generally replace older cows in the herd, which are sent to slaughter. Males are slaughtered for veal shortly after birth. 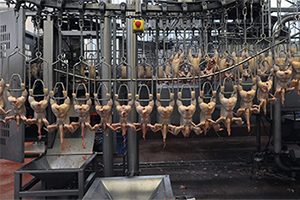 The few U.S. laws designed to protect farmed animals have been totally ineffective. The old 28-Hour Law, intended to provide food, water, and rest during transport applies only to animals traveling by barge or trains, but today’s transport is done by trucks. The 1958 and 1978 Humane Slaughter Acts, requiring that animals be rendered unconscious before slaughter, does not cover birds – the vast majority of animals slaughtered, and has never been properly funded anyway.

Until the mid 1970s, there was a general consensus that consumption of animal flesh and dairy products was essential to human health. This is the likely reason that the United States was unable to spawn a viable vegetarian movement till 1975, nearly 130 years after the Brits.

The first prominent challenge to that consensus came from Frances Moore Lappe in her best-selling 1971 treatise Diet for a Small Planet, which exposed the devastating impacts of beef production on the environment and food scarcity. Unfortunately, the effect was a massive switch from beef to chicken consumption, as Americans were not ready to relinquish animal flesh. 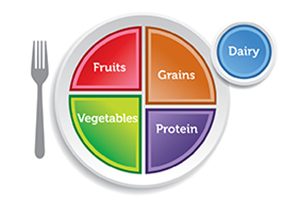 Official breach of the consensus on eating animals finally arrived in a small pamphlet titled Dietary Goals for the United States published in January of 1977 by the U.S. Senate Select Committee on Nutrition and Human Needs. The original edition recommended reduced consumption of meat, though that was removed under intense pressure from the meat industry and even the American Medical Association, which insisted that nutritional advice should come from one’s personal physician, rather than a government proclamation.

An early attempt to organize U.S. vegetarians was launched in 1850 by British vegetarian advocate William Metcalf with leading American advocates Bronson Alcott and Sylvester Graham. But, their American Vegetarian Society, along with others throughout the U.S. and Europe, were formed by health advocates defying contemporary nutritional norms and died with their founders.

The current U.S. vegetarian and vegan movements owe their birth to an American motivational speaker and life-long vegetarian named H. Jay Dinshah, who founded the American Vegan Society in 1960. Although Jay passed away in 2000, that society is still operated by his wife Freya and daughter Anne.

In 1973, Jay persuaded the International Vegetarian Union (IVU) to hold its 1975 World Vegetarian Congress in the U.S., for the first time ever. To carry out this monumental task, he formed the North American Vegetarian Society (NAVS) with support of two assistants – Brian and Heidi Graff and his wife Freya. Every year since then, Brian and Heidi and their NAVS associates have been running the Vegetarian Summerfest at the University of Pittsburgh Johnstown campus.

The historic 1975 gathering, held on August 16-28 at the University of Maine in Orono,  launched the current U.S. vegetarian and vegan movement and led to the formation of some 60 local groups. It would also provide the foot soldiers for the animal rights movement that would come six years later.

Few of us realize today how much our movement owes to the pioneering enterprise of Jay Dinshah back in 1975, before the consensus on eating animals was officially breached.

[I have abstracted most of this material from the scholarly masterpiece
The Longest Struggle (2007) by historian Norm Phelps.]